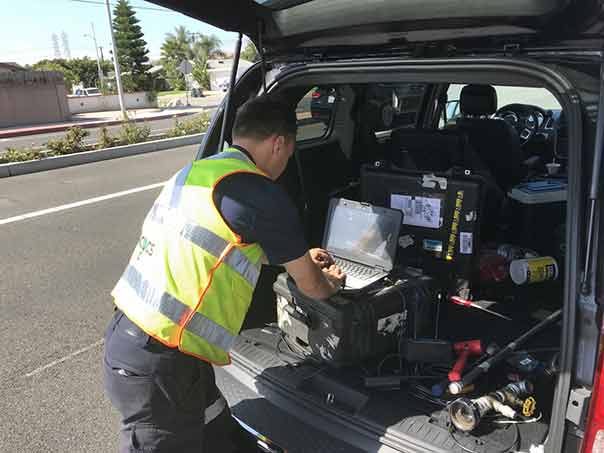 Ontario’s Regional Municipality of Peel is the third largest water utility in Canada, servicing a population of approximately 1.38 million people in the cities of Mississauga, Brampton and Caledon. Its water system is comprised of 4,500 km of water mains, ranging in size from 100 – 2,500 mm. The majority of these water mains are PVC and rel- atively new, but there are over 510 km of older metallic piping (from 150 – 300 mm) remaining. The majority of issues with leaks and watermain failures are found within these older metallic mains.

Peel Region currently uses the State of Good Repair program to plan its water- main renewal. Based on industry standard life cycle assessment, the existing metallic mains have approximately 10 – 15 years of expected service life remaining; the Region has been replacing 15 – 20 km of them per year over the last five years.

“The current program plan is to replace all remaining metallic watermains within the next 20 years, so identifying and prioritizing replacement of the pipes in the worst condition is very important in order to minimize leakage and pipe bursts during this time frame,” said Nimarta Gill, project manager, State of Good Repair for Peel Region.

According to Jay Shah of Echologics/ Mueller Canada: “Savings can be gained by replacing the right pipe at the right time. This ensures that limited capital budgets for pipe replacement are uti- lized as efficiently as possible.”

The current decision matrix for the selection of watermains to replace is “desk- top based”, meaning that decisions are based on subjective components such as performance, age and hydraulic informa- tion. Specifically, Peel Region uses pipe age, a watermain break frequency (=>7 breaks/ km), hydraulic limitations, pipe criticality and adjacent utility renewals such as sew- ers in their current desktop approach.

>The pilot study involved six neigh- borhoods in Mississauga and Brampton, totaling 16.2 km of watermains. Those selected included pipes that were already earmarked for replacement in 2019, those with varying break frequency in the area, any with no or little break occurrences, pipes in the size range of 150 – 200 mm, and a mixture of cast iron and ductile iron pipes. The 16 km of testing was seg- regated into condition ratings for 133 seg- ments of pipe, 125 m in average length.

“Because of the nature of the ePulse technology, we were able to get this work done in the winter. This is typically a down time for road work, so it’s a good time to allocate resources,” said Gill.

Testing was completed within three weeks, averaging 1 km per day of field testing. It only required minimal Peel Region operations staff support to locate and provide access to valves and hydrants. Using ePulse meant no excavating and no disruptions to service as it is per- formed during normal system operating conditions. Testing is all done externally using existing access points (valves and hydrants), so no tools are ever inserted into the pipe or in the water column.

Once analyzed through proprietary algorithms, results are easy to interpret and support proper decision making for prioritizing watermain renewal pro- grams. Interestingly, the findings showed there was no correlation between pipe age and pipe condition in the pilot area. Some of the pipe sections earmarked for replacement in 2019 were actually in moderate condition and could be deferred, while some of the pipe that had no or very few breaks were actually in poor condition and needed to be replaced ahead of schedule. 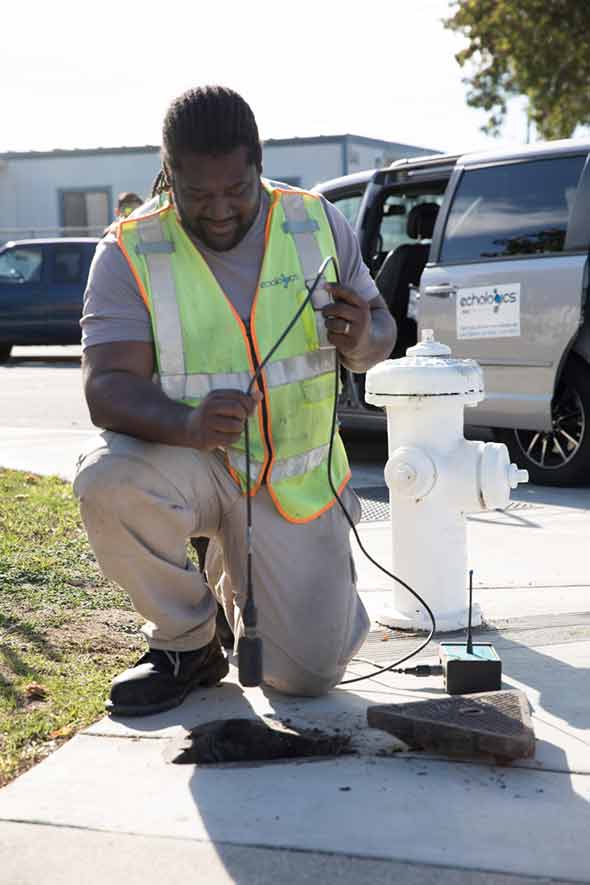 A field technician prepares to measure the structural integrity of a water distribution main.

Pipe replacement in Peel Region costs on average $1 million per km. The desktop break model to determine pipe replacement can be around 80% accu- rate, which amounts to a cost error of 20% or $200,000 per km, if good pipe gets replaced. This does not include the time and cost it takes to conduct the desktop study itself.

“With 15 – 20 km of pipe included in the annual replacement program, these savings add up real fast,” said Shah.

An additional benefit of acoustic leak detection is the simultaneous detection of existing leaks. “We found three con- firmed leaks, including two full circum- ferential ring breaks that we did not know about. With this information we were able to send out crews to the exact location for repair, avoiding a costly emergency situa- tion as the leak escalated,” said Gill.

Ultimately the cost of acoustic inspec- tion was less than 1.9% of current pipe replacement costs. Peel Region is now incorporating pipe condition ratings into a Decision Support System. This process can help to ensure that future capital spending is maximized and help to lower the occurrence of watermain failures and emergency repairs.