As one of the few above-ground fixtures in fire system infrastructure, fire hydrants are some of the more vulnerable elements in the system. “Hydrants are probably the main reason for the troubleshooting calls we receive,” says Andy Singer of Mueller Water Products. Individuals who operate fire hydrants can have a wide range of understanding and experience with them. Water distribution utility crews typically perform routine maintenance and repairs. However, not every employee has the same degree of experience with inspecting, flushing, or checking pressure.

Fire departments operate hydrants to fight fires, partner with utilities for flushing programs, and conduct flow-rate testing for fire suppression purposes. Some firefighters may be unaware of the forces at play and how a fire hydrant functions as part of a water distribution system. This could lead to mistakes such as closing a valve too quickly and possibly causing damage due to water hammer in the system.

Contractors with bulk water trucks, street cleaners, and even private citizens may also access a public hydrant, oftentimes without the consent or knowledge of the water utility. “With so many people touching them, inevitably some are not going to be knowledgeable and well-trained,” says Singer. “New employees or volunteers don’t always know where the pitfalls are, and that’s one reason we get so many troubleshooting calls on hydrants.” 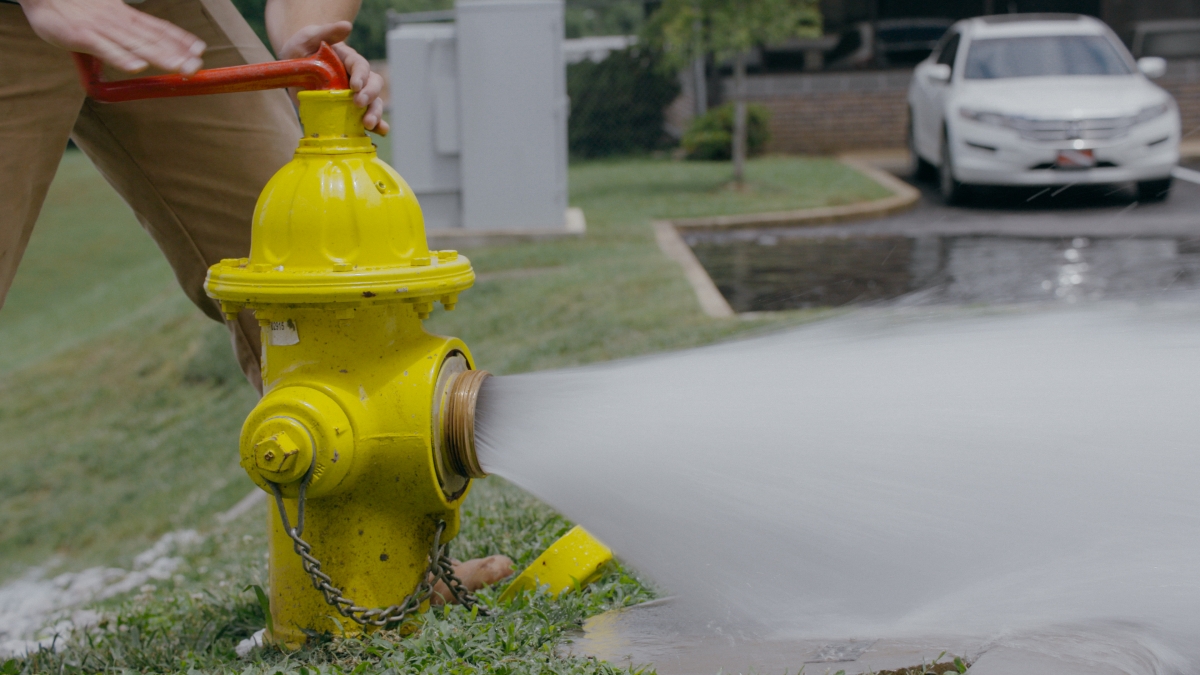 Because hydrants are installed on lateral lines that come out of a water main, they are inherently dead-end piping runs. This makes them magnets for debris that get into the system during initial installation or as a result of water main repairs. Leaks are typically caused by a piece of debris getting trapped in the main valve.

One of Singer’s more unusual experiences came early in his career, and it involved a pair of blue jeans. “How they got there, I don’t know. But they certainly were mangled around the main valve,” he says. A similar experience came when he found someone’s fully stocked lunch bag inside a leaking hydrant. “You’ll often find debris, typically sticks and stones, in areas of new construction,” Singer relates. “The lunch bag incident happened in a new development where the landscape was barren. A construction worker probably just put his lunch in the only available shade he could find, which happened to be inside a stack of pipe that was about to be installed.”

One of the most “creative” lubricating solutions Singer has experienced is the use of used motor oil in the bonnet of a hydrant. He cautions against that practice for two reasons. Firstly, a non-FDA compliant or NSF 61 listed lubricant may compromise the safety of a potable water distribution system. Secondly even among food-grade lubricants, only the manufacturer-recommended lubricant should be used to protect O-rings, seals and other components from breakdowns caused by incompatible chemistries.

On another aspect of lubrication, Singer explains that the valve on a hydrant should be fully opened and fully closed every time the hydrant is used, whether that is for firefighting, flushing, or testing. Doing so is really a preventive maintenance activity because it forces the oil to re-coat all the moving parts in the bonnet. Another reason for the fully open/fully close rule is that hydrants are not designed to be throttled (operated partly open). Running them that way increases the risk that debris can get stuck between the main valve and seat ring, cut the main valve, and cause a leak.

Another incident Singer witnessed was the case of a newly installed hydrant being seized up when it was time to be commissioned. “This was a school construction project where hydrants were installed about a year before construction was complete, so the utility contractor turned off the isolation valves once all hydrants were installed and tested,” Singer explains. “It turns out that a landscaping contractor was using this particular hydrant to fill a tank truck, until the isolation valve was turned off. They must have used a scaffold pole on the end of a wrench trying to get water from that off-line hydrant, because once we disassembled it, the shaft looked like one of those spiral licorice sticks your kids eat.”

“In recent years, many major manufacturers have updated to two-part epoxy coatings vs. alkyd enamels to provide much better outdoor performance,” says Singer. Because those new coatings are so much more durable, painting schedules, as well as painting practices, should be updated to take advantage of that long-lasting life.

“Utilities repaint hydrants for a variety of reasons,” Singer explains. “Sometimes they do it to colour-code according to flow rate so firefighters can know what to expect when they arrive at a fire scene.” The National Fire Protection Association (NFPA) Standard 291 recommends that bonnets and caps be colour-coded to signify the “available flow” of the hydrant in gallons per minute (GPM), calculated at 20 psi/1.5 bar residual pressure. That colour code is light blue for 5,675 L/min and above, green 3,875 – 5,675 L/min orange 1,985 – 3,785 L/min, and red for less than 1,985 L/min.

Whatever the reason for painting, Singer advises that workers take the extra few minutes to do the necessary prep work of roughing up the surface in order to ensure that the new paint adheres well, instead of flaking off after a year.